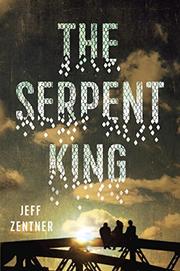 Every high school has those kids that don’t fit in. In The Serpent King by Jeff Zentner, three teens from Forrestville, a small Tennessee town named after the founder of the Klu Klux Klan, are bound together as misfits and as best friends. Lydia comes from loving and prosperous parents; she’s got a popular fashion blog and is on her way to college in New York City. Travis escapes his father’s drunken beatings in the fantasy world of knights and noble quests. Dillard Early Jr. can’t escape his name: his snake-handling, poison-drinking preacher father was incarcerated for child porn and his grandfather went around wearing snakeskins and killing every snake he could.

Written in third person, this novel alternates among the three characters. The story covers the characters senior year of high school and is filled with poverty in the rural South, enduring friendship, heartbreak, clinging to faith at all costs, fear of the unknown, and learning the courage it takes to survive and to thrive.

While it took me several chapters to get sucked into the story, I ended staying up way too late to finish the novel. The book covers the harsh reality so many outsiders have to live in. And while parts of the novel did showcase that this was a debut, it’s a phenomenal coming-of-age story about hope and courage, of salvation and betterment, of surviving and flourishing when life seems too bleak to continue.

(Photo courtesy of myself.)