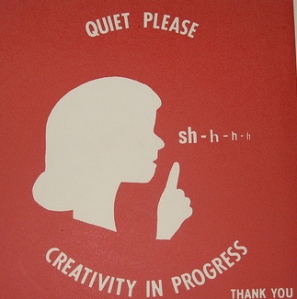 When I was in graduate school, several of my professors believed that you had to write everyday, even when you didn’t feel like it. If you weren’t writing everyday, then you weren’t successful.

However, I was at a party a few weeks ago, and a young writer expressed how her teachers had told her the same thing, and how she was worried because she hadn’t been able to write anything for several weeks. I told her that, that was fine. Some people are able to write everyday. Others aren’t.

I’m someone who needs breaks from writing. I’ve tried to force myself to write, when I’m not in the mood. Often, I ended up frustrated and feeling like I was a really crappy writer. For me, I need to take time to refill my creative reserves. If that means not writing for a week or two, then I’m going to do it. I know that my creativity will come back, and then I’ll be in a writing frenzy.

Those times that I’m not writing, I’m working on ways to replenish my creativity. Here are three of those ways; I hope they help you as they’ve helped me:

The most successful people are those who never stop learning.

People usually assume that I majored in English as an undergraduate. I didn’t. I minored in it, but my major was in Clinical Psychology. At the same time, people who only know that I work in pediatric research are shocked to learn that I have a MA in writing. They assumed that I was working toward getting my MD or PhD in biology, immunology, or some other medical-science field.

But I’m interested in a wide range of topics. Being knowledgeable in various fields builds my confidence, helps me discover and fine-tune other skills, stimulates my creativity, and helps generate creative solutions.

I’m continuously taking courses, listening to seminars, and attending conferences. Most of my courses are online. Some I pay for, while others are free. Take a look at Linda.com or edx.org , or see what types of training may be offered through your work.

I’m constantly reading. I challenge myself to read a certain number of books each year. I keep track of the books I read, and when others look at my book lists, they’re often surprised at the diversity. I read both non-fiction and fiction, from And If I Perish: Frontline U.S. Army Nurses in World War II to Halfway to the Grave (Night Huntress, Book 1) to The Old Man and the Sea .

When someone tells me that they absolutely refuse to read any fiction books, I internally cringe. I’m a writer, and though I don’t write non-fiction, I still read it. Though I don’t write contemporary, I read it. Each successful book, whether literary or not, can teach us about how to become successful writers.

Look at Fifty Shades of Grey . It is not a literary book, and most people would agree that the writing is amateur and formulaic. However, the series has sold over 65 million copies, and the first book has been made into a movie, which makes the series a success. Many factors contributed to its success, including hitting the market at the right time, the main characters being modeled after Twilight’s main characters, and the age-old concept that sex sells.

I read the book because I wanted to see what all the fuss was about, and I saw the movie for the same reason. Regardless of my personal opinions, I contributed to the success of both the book series and the movie, just like millions of others did.

Mixing genres, teaches us about different aspects of writing, and by studying successfully creative people, we can be inspired.

Books have the power to change our lives. Read, and discover how they’ll change yours.

People produce their best work when they are inspired by or working with others. You may be writing a novel by yourself, but it’s usually harder to be creative, when you’re not interacting with anyone else.

According to Goins, Writer, the “solitary genius” concept of writing, where creative people are isolated from the general population because they spontaneously produce creative concepts, is a myth. Goins, along with Keith Sawyer, a leading scientific expert on creativity, discussed why it takes a group to be creative. A group allows people to connect, and creates a safe place to exhibit the pressures involved with producing innovate work, as well as a way to vent our frustrations.

Hanging out with intelligent people, who challenge you, stimulates your creativity, and helps you build connections. Who knows, maybe one of those people will be your key to success.

How do you generate creativity?