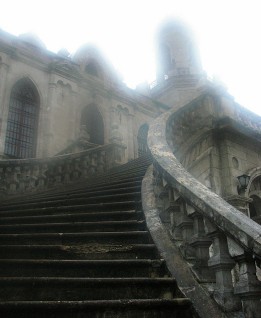 Over the years, Gothic has come to mean a variety of things. However, the Gothic novel began in England (Horace Walpole’s 1764 The Castle of Ortanto is considered the first Gothic novel). When the Gothic novel emerged, authors used the genre to demand some social, cultural, or political change in the status quo.

What makes a Gothic novel gothic?

Setting plays a huge role. Feelings of gloom, dread, mystery, and suspense, as well as some dramatic or sensational elements (think incest and necrophilia) are vital to the Gothic. Taboos, fear, and anxiety are also fundamentals of the genre.

Look at Emily Bronte’s Wuthering Heights and Charlotte Bronte’s Jane Eyre. In Wuthering Heights, there’s a love that crosses life and death, there’s family and social class transgressions, fear of imprisonment and escape, ghosts, necrophilia, revenge, and more. (Not to mention the traditional Gothic landscape the novel is set in.) In Jane Eyre, women’s psychological, moral, and social predicaments are explored, the Gothic nightmare is investigated, as are the elements of persecution, hauntings, prophetic images, solitude, and death.

What are some features of the Gothic novel?

Something to be aware of when reading or writing the Gothic is that many elements of the Gothic have been overused. (See Mallory Ortberg’s Every Southern Gothic Novel Ever.) It’s important to find innovative ways of creating a gothic atmosphere, while still keeping in mind the traditional tenants of the genre.

What are your favorite elements of the Gothic?

3 thoughts on “Let’s Get Gothic: The Gothic Novel”