In it’s most basic terms plot is what describes the structure of a story. It’s the arrangement of events within a novel.

Why’s plot so important? Well, without it, there’d be no story.

How about plot structure? If the plot isn’t structured correctly, then the story falls flat.

Many people describe plot structure as a mountain. That’s the best way to describe it. If you look at Freytag’s Pyramid, you’ll see his multi-point system. (I bet it’ll look familiar.)

*Gustav Freytag was a German novelist. He saw similarities in successful stories and diagrammed a story’s plot to reflect those similarities.

There’s another version of Freytag’s Pyramid. This one is more commonly used today because it’s more effective. All the parts are still the same, however what’s changed is the length of those parts.

A modified version of Freytag’s Pyramid: 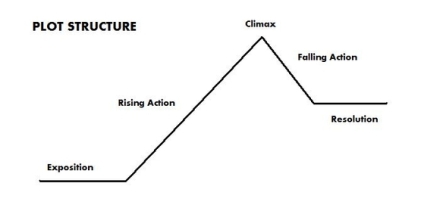 You can have false climaxes, where the characters are led to believe everything is over and has worked out in some way or another, but you want your true climax to be much closer to the end of the novel than the beginning.

Think of it this way, if you have a 50,000 word book, you want 40-45,000 of those words to come before the climax. Then, the climax itself should last for at least a chapter (depending on how long your chapters are). The remaining word count is left for the falling action, resolution, and denouement.

If this seems like a lot, don’t worry. Manuscripts are never perfect the first time through. Most aren’t ready by the fifth time through either. Get everything written down. Get your story onto paper. Let your madman (inner creative child) go wild. The judge (your inner critic) can come out later.

How much do you take plot structure into account when you write?